8 ways to silence your inner critic for good 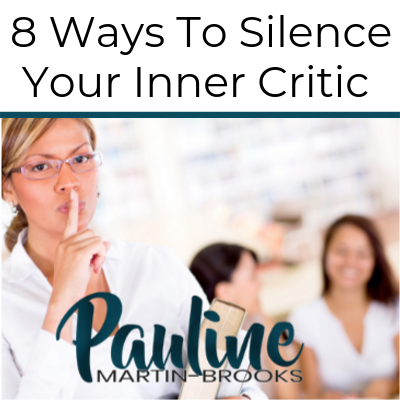 This week I walked into my office and said these exact words in my head.

It’s no wonder at this point that I started to think less clearly. You see our minds are so unbelievably powerful that the thoughts we have, both in our heads and out, give cues to our body to behave in a certain way.

As a man thinketh so he be etc etc etc

Basically when I say something like that, it drains my strength and my mental capacity.

My husband has a particularly harsh inner critic it turns out.  So, I’ve been keen to explore ways to help him with it. These are some of my favourite.

I love to do this exercise with kids and my husband on occasion. It’s based around kinesthetic muscle testing and can also be used to see if someone is lying to you.  More on that in a later blog post.

The method is quite simple and involves someone (Person A) raising their arm to the side. Someone else (Person B) tries to push their arm down while person A tries to keep it in place. Normally Person A can maintain their arm level without an issue. What’s interesting though if Person A then says out loud  "I’m an Idiot, I’m Stupid, What did I do that for" etc etc then Person A loses their strength instantly.  Person B can then push their arm down without an issue. If Person A then says things like "I’m strong, I can do this, I’m amazing", their strength instantly returns.

I’ve found this muscle testing method is a great way to identify the danger of your inner critic.  And it’s particularly effective with boys/men as they usually like to demonstrate their strength whenever they can!

Many years ago, when I was working on my own inner critic, I used a technique where you visualise the inner voice. You imagine sending it down your body to your big toe and kicking it across a few football fields. It’s quite effective and you can add a sound in your head as you do it, which makes it a bit more fun.

This involves directing the words to your best friend in your imagination. It’s interesting that the words we say to ourselves in our heads are so unbelievably harsh sometimes, that if we said them to a friend they wouldn’t stay a friend for long.

This involves you saying the words to either an imaginary child or better yet yourself as a young child.  Again this is quite a disheartening thing to do and it really helps minimise that voice.

Our inner critic lives in our head.  So it’s particularly useful to say out loud all those things that you normally say in your head. This makes it more real and it’s much easier to track your progress over time.

This method involves you writing down every mean, horrible nasty thing that you say to yourself in your head. It’s quite enlightening and you’ll soon realise that, if you’ve ever spiralled, this type of thing is often the cause.

This method revolves around six praise statements for every harsh inner critic statement. I love this method as it’s also effective in boosting your self esteem. I often use this with my husband when he verbalises something like “that was stupid” and I say out loud to him “I love myself because______”.  I repeat that five more times and he has to finish the end of the sentences.

This can be a real struggle for someone that beats themselves up a lot, but I’ve found it’s quite effective for helping people see a better side to themselves.

The Mean Kid at School Method

Imagine that your inner critic had a name and it was called after your least favourite person from school. Then when the voice comes into your head you can just thank it and ignore it like you might have done with that mean kid at school.

Your inner critic doesn’t have to be a lifelong companion, that’s the job of your intuition not your inner critic. So use the methods above and be aware of the voice and make sure you think it and send it on it’s way.

Pauline Martin-Brooks is a multifaceted individual. She is passionate about efficiency and evolution. She routinely learns and implements anything that helps her achieve this for both herself and the entrepreneurs and teams she works with. As such she is both an Ontraport (CRM) Certified Consultant and Trainer who helps people with the Ontraport platform or thinking about getting the Ontraport platform to manage the automation in their business. She is also a trained therapist in both NLP, Rapid Transformational Therapy and Hypnotherapy. She focuses on improving Productivity, Concentration and Memory, and Removing Procrastination for Entrepreneurs so they can achieve their big hairy audacious goals. From 2003 to 2015 she worked with Fast Growth companies in a variety of sectors from Personal Development to Property and Finance and then onto 2 of the largest Entrepreneurial Training organisations. Her specialty in those companies was to source Strategic Partnerships to fill events and allow for massive expansion. She has used this strategy to bring in millions in revenue. She now works with a select number of small generally service based businesses to show them how to identify, approach, close and nurture the most important relationships in their business. She has growth hacks to help you get results fast, to utilise different members of your team including offshore admin staff, saving you both time and money.