That Little Voice In Your Head - Pauline Martin-Brooks

That Little Voice In Your Head 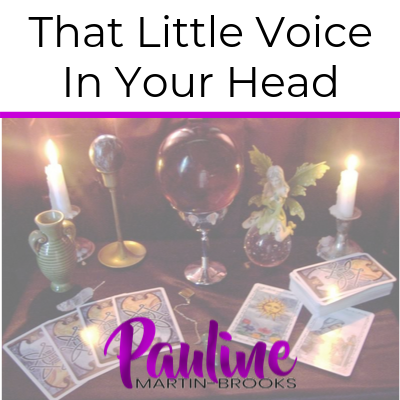 My fascination with the Occult started when I was quite young.

My mum used to say that my nanna was a gypsy and that sometimes she could see things and they often came true. Like the time she said an Indian man was going to cause me great pain-that turned out to be my dentist!

So it was not uncommon for me to have moments of intuition myself that proved true sometimes under incredible odds.

For instance one day I was making a cup of tea and this flash hit me and I saw myself singing on stage - this just about crippled me - I don't sing. Someone once handed me a card on a dance floor and it said "I've seen you dance, if you can sing, call me" - I threw it away!

Well later that morning, I headed to an event where they had a Prize Draw and I put my name in for it. It was held at the old Convention Centre in Sydney and it was full, so more than 900 people were in the the room. I won the draw. Then I got up on stage and had to roll two giant dice, each outcome was represented by a prize that I could win except for the number 4 - that was SING A SONG - well you can guess what happened. I grabbed the mic and said oh no I saw this happening and I just know I'm going to be singing today. Of course I rolled a four had to sing a song. As i happened to know the team running the event they thought it would be a riot and chose the song Like A Virgin for me to sing in front of close to a 1000 people!

What was interesting about that event was that I had set my intention for the day to get to know as many potential affiliates as possible - I was the Affiliate Manager. So later that week when I ran an Affiliate Webinar everyone remembered me from the event! So I achieved my intention - just in a very round about way. Which is why people say be careful what you wish for!

Another time that stands out for me is when I fell in love in Canada many many years ago, I said to my now husband Conrad that I was very much in love with him but the only thing that doesn't make sense to me is that i always thought i would marry a James, and I believed very strongly in my intuition.

Without missing a beat he said babe I am a James and he proceeded to whip out his license and prove it to me and yes he was actually named James Conrad but never used the James. I like to use it when he chauffeurs me around, Take me home James I say!! Needless to say I married him shortly after!

So here's a question for you, do you ever hear a little voice in your head that tries to steer you in a particular direction?

I've found that listening to my intuition does several things, one it gets louder next time and less easy to ignore. Two I feel like I'm helping myself and have faith in my psychic abilities - I truly believe we are all psychic and capable of so much more than we give ourselves credit for. Three it often leads to the perfect connection or piece of information that i was needing at that time.

The other thing I notice is Synchronicities for instance I'd barely heard of Dr Bruce Lipton a week ago, even though he wrote the book the Biology of Belief which should have been devoured by me years ago I'm sure.

​His name was mentioned to me at an event I attended last week, then my girlfriend mentioned the title to me then a few days after that a fellow therapist mentioned it to me. So I'm about to buy that and I expect to find something rather profound in it because of the push from the Universe for me to read it.

So if something like that happens to you where several people mention something to you, act on it and expect great things to come of it. We don't get what we deserve we get what we expect.

Where are you placing your expectations and how is that affecting the way in which you show up on a day to day basis?

Are you setting intentions, heck do you even know what you value anymore and how to get more of that into your life?

Maybe you just need a Mindset shift, I help clients work out their values, remember what they're grateful for and generally uncover some limiting beliefs that have been holding them back for YEARS - If you need help in this area then please Click Here!

Pauline Martin-Brooks is a multifaceted individual. She is passionate about efficiency and evolution. She routinely learns and implements anything that helps her achieve this for both herself and the entrepreneurs and teams she works with. As such she is both an Ontraport (CRM) Certified Consultant and Trainer who helps people with the Ontraport platform or thinking about getting the Ontraport platform to manage the automation in their business. She is also a trained therapist in both NLP, Rapid Transformational Therapy and Hypnotherapy. She focuses on improving Productivity, Concentration and Memory, and Removing Procrastination for Entrepreneurs so they can achieve their big hairy audacious goals. From 2003 to 2015 she worked with Fast Growth companies in a variety of sectors from Personal Development to Property and Finance and then onto 2 of the largest Entrepreneurial Training organisations. Her specialty in those companies was to source Strategic Partnerships to fill events and allow for massive expansion. She has used this strategy to bring in millions in revenue. She now works with a select number of small generally service based businesses to show them how to identify, approach, close and nurture the most important relationships in their business. She has growth hacks to help you get results fast, to utilise different members of your team including offshore admin staff, saving you both time and money.